The Japanese Government has granted 192 billion kip for the construction of Sekong bridge and also a human resource development scholarship scheme to accelerate the economic growth of Laos.

The signing ceremony for the two project grants was held at the Ministry of Foreign Affairs in Vientiane yesterday.

The project agreement was signed by the Ambassador of Japan to Laos, Mr Hiroyuki Kishino and the Deputy Minister of Foreign Affairs, Ms Sounthone Sayachak among honourable guests who attended the event.
The cost of construction of the Sekong bridge on National Road 16B in Sekong province is approximately 2197 million yen , which is around 172 billion kip and the human resource development scholarships are also worth around 257 million yen, which is approximately 20 billion kip. 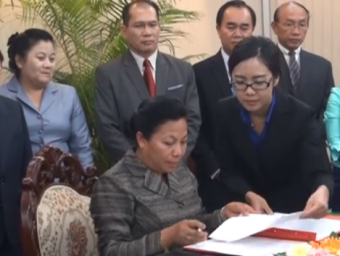 At the ceremony, Mr Kishino emphasised the importance of infrastructure and human resource development in accelerating economic growth. This could potentially enable poverty eradiation through the equitable distribution of benefits.